Last month I blogged about the talented Quentin Jones, who makes cool collage style videos. This month we are in for anohter treat. She has done a new video together with renowned make up artist Lisa Eldrige for Nars. The interactive video lets you decide which of the 8 new Nars lip pencil colours you would like to be featured. The models in the video are Sarah Ruba, the singer from the cool Canadian electronic band ‘New Look’ (she toured recently toured with the XX) and fashion icon (& designer & stylist ) Catherine Baba who is really into 20’s and 30’s old school hollywood fashion. As for the formulation of the pencils – it is really good: high pay off and creamy texture. I highly recommend them. Check the video  and these beauties out! 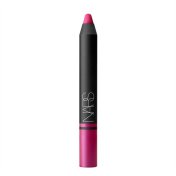 I’m adoring all these beauty and fashion animation videos, so clever, beautiful and witty.

It all started with Another magazine who  commissioned Quentin Jones in 2010 to feature the coveted  Chanel Particulière nail polish. Peter Philips, the creative director at Chanel, is also a graphic designer and he followed this up with an amazing video featuring Chanel make up as robots in 2011. This video was a huge hit. Quentin Jones has just been been featured in LOVE magazine and Hogan recently did a little ‘a day in the life’ of video of Quentin. Other brands she has worked with are Victoria Beckham and Kenzo.

Sadie and  Joe Williams are animation masters who have worked with Marc Jacobs and Hillier. They recently did an animation for Topshop featuring SS13 nails.

Click on below videos for some big smile action: